Volleyball is a game created by William G. Morgan in 1895 under the name Mintonette now known as Volley Ball. Volleyball itself can be played on indoor and outdoor courts with a net for the men's 2.43 meters and the women's 2.24 meters.

Know the basic techniques of volleyball

The basic technique of the Volleyball Game is divided into 4, namely Block, Service, Smash or Spike, and Passing, where all these techniques must be mastered by all volleyball players. There will be more highlights in the player's position, such as as a Libero you have to be adept at giving passes or passing to players who will do smashes. Here is an explanation of each movement.

The basic technique of service is the blow done from the backline area of the game field until it soars over the net and lands inside the opponent's area. Service techniques are performed at the beginning of the game, when there are additional points and violations occur.

This technique does look easy. But if practiced it will be noticeable that the difficulty in doing the service down is directing the ball as desired, with frequent exercises and routines you will easily do the service down. Floating service can be done by: 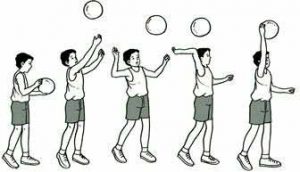 Overhand round-house service has another name Hook Service. This service is quite difficult to do. To do this service you have to have the precision to hit the ball to get through the net and the ball has to rotate so as not to become a floating serve. The ways to do this are:

At first glance, this service is like floating service, but the difference lies in polishing the ball. Because floating service ball movement is silent should not be until spinning, while overhand around service utilizes the turn of the ball to get a service that can swoop or turn. 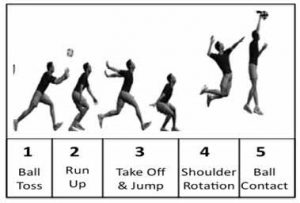 Jumping service is the hardest teknk service because besides the accuracy when hitting the ball we have to have accuracy in jumping to perform service.

This movement can not be mastered in a short time other than often practicing you also have to have high flying hours to complete this professional technique. 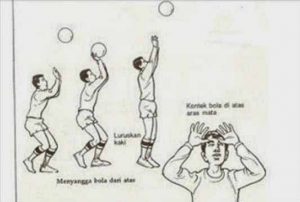 The basic technique of passing movement or also can be called reception is a technique that aims to receive, hold and control the ball service from the opposing player passing technique in to two kinds namely upper passing and lower passing, Here is an explanation of each.

Basic technique of passing up

Upper Passing Technique is a technique commonly used to provide bait or set up from the toser to the player who will do the smash, therefore this top passing technique is very useful in volleyball games. 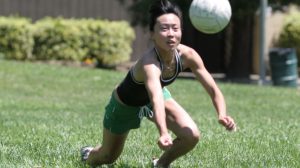 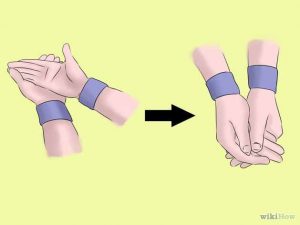 The basic technique of passing under one hand is a state where the player's range is too far and low to make the upper pass. This usually happens when the first player receives an imperfect ball in returning the ball. This technique is performed in a slightly bent body way, but if it is felt still unable to reach the player's range then usually the player will jump flying to save the ball. 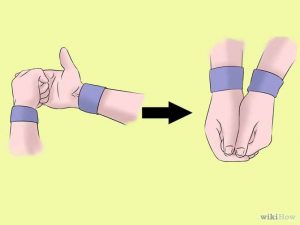 Meanwhile, the thumb over the palm of the left hand clenched and the right hand holding the left hand. Keep in mind that this technique is the defining technique in the game. If in passing you are quite adept at the small possibility that the enemy can score, and vice versa if your reception is very lacking, then each enemy performs an attack most likely the ball is not very highly acceptable and can increase the enemy's score. 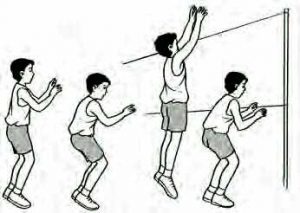 The Blocking Technique is the only technique that players choose. Because blocking techniques are only used to withstand and prevent attacks from opponents such as smashes. Therefore this technique can only be done by players who have a high body, but do not close the possibility of our height increasing one day and enough to be able to perform blocking techniques, so this technique also has to be mastered.

Get ready near the net.
Knees bent prepare to jump, the position of the hand in front of the chest prepares to block the ball.
At the right time jump as high as possible with your hands tight and pointing upwards. Remember your hands must be tight so that the ball does not escape redeeming your hand gap.
Land with a slightly bouncing leg to minimize the risk of injury

Blocking technique when viewed by many people who do, then it can be divided into 2 kinds namely single Block and Block friends. Single blocking is done by one player while blocking friends is done more than 1 person, usually 2-3 people.

If at the time of practice, blocking techniques usually done with yourself alone is enough, without a real smash.

Smash or spike technique is jumping and hitting volleyball with the smallest degree of tilt and greatest force towards the opponent's area. The Smash technique is the most interesting technique to learn from the basic technique of volleyball, because it is the coolest technique and becomes a scourge for the opposing team because the right basic smash technique can increase scoring.

Smash technique is not easy to learn and master, because we have to have an instinct where and when we have to hit the ball to get the right shot. Not only that, when we get into the game we also have to be able to get past the blocking from the opponent.

In general, how to do Smash are:

Prefix: Take a distance of about 3 meters from where the ball will soar. Take a slightly wide step with one foot followed by the other next to it. It is handled with hand gestures extended forward swung backward.
Jump: Jump as high as you can. When jumping makes sure your hands swing upwards and prepare to smash.
Punch: Hit the ball into the opponent's area with a little polish so that the ball can spin and go down swooping.
Landing: Land with a slight bounce to reduce the risk of injury or sprain.

Smash according to the direction of the ball divided into 2 i.e. cross smash and straight smash. As the name suggests, a cross smash is a smash directed diagonally to the left or to the right to target an opponent's empty area. While the technique of smash straight is a smash that leads straight forward because it feels like a punch and space in front is suitable to be targeted.

Smash according to the set-up or bait is divided into 4 kinds namely open smash, semi smash, quick smash, push smash.

Open Smash: Open Smash is performed when the batsman performs the initial movement after the feeder releases the bait ball. The ball is hit while at the top of the jump and the highest range of the arm.
Semi Smash: Hitters walk slowly towards the fall of the ball at a slow pace. When the ball is at a height of approximately 1 meter above the net, then the player must immediately take a jump and hit the ball
Quick Smash: Once the ball reaches the feeder then the hitter must immediately take the smash step. When it's about one arm's length with the ball, the batsman takes a jump with his hands ready to hit. The feeder delivers the ball right in front of the bat, hit it immediately.
Push: Smash Hitter before doing a smash run off the field standing near the net post. The batsman moves the prefix in parallel direction on the net when the height of the ball is felt when the batsman has to jump up and hit the ball immediately.

Smash technique according to the curve of the ball is divided into 3 namely Drive Smash, Top Spin, and Lob:

Being an amateur player who goes to professional needs training and hard work so that we can have skills recognized by the community. But it all starts with a basic technique, just a deeper study. Do not get bored quickly in undergoing this basic volleyball technique practice, because with a good base we can make good advanced techniques as well, professional players still do basic exercises even though they are very proficient.